Immediately following the news of the highly praised “Fantasy Mission Force”, its creator, Realtime Gaming Inc., made the decision to develop a second video slot.

This time inspired by the famous actor and stuntman Jackie Chan. They made use of “Eagle Shadow Fist”, a martial arts motion picture produced in 1973.
Interesting side note: This movie on the subject of the Japanese occupancy of China during World War II is one of only a handful of films in which Jackie Chan actually passes away. So much about the movie, now about the slot that goes after the same name:
“Eagle Shadow Fist” has 5 reels and 25 paylines. The backstory is set in a rural community in China. Game players are going to help the unfortunate Chinese inhabitants to overcome the Japanese invasion force. You as a player fight alongside Jackie Chan, Hao Li and Qiu Yuen. You can trigger 20 free spins with a tasteful 2x multiplying factor or – better still – shatter the progressive jackpot!

Let’s talk about the main heroes of this plot: Hao Li is Tang, despite being poor, has fantastic Kung Fu skills and leads the resistance. He is supported by Si To (played by Chan) who has an awesome acrobatic talent and is eager to show it off. Except for the Peasant, there are quite a few straightforward playing cards that serve the player as low-value signs. A tackle involving two men is represented by the Scatter, 3 Scatters activate free spins. The Wild is accompanied by a Fist, resulting in a graceful 2x multiplier put on all wins.

Considering the fact that the action of the 2018 release is placed in a basic setting of a poor Chinese settlement, the smart folks behind Realtime Gaming also kept the rules of the game as uncomplicated as they could. This approach has lead to 5 reels, 3 rows and 25 set paylines, which in turn pay out from left to right, starting with the reel on the far left side.
Given that the slot has not yet been launched, we estimate that the lowest requirement for landing a payout will be three of a kind. Our sources told us congruently that the money denomination will go from 0.01 to 1 GBP, resulting in a lowest wager of 0.25 GBP, and a biggest possible bet of 25 GBP. 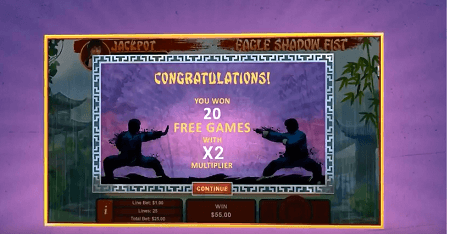 3 Scatters on the reels will start the showdown between our main hero and the chief villain of the movie. It will also trigger free spins, 20 to be exact, and all wins will then be doubled. If, as an example, punters produce a winning combo incorporating a Wild with 2x multiplier, the wins will quadruple.
Very much like the “Fantasy Mission Force” video slot machine, “Eagle Shadow Fist” possesses a progressive jackpot. This feature will be activated arbitrarily following each spin during the course of base game. The central secret is what size the progressive jackpot has.

As a nice addition to their lineup, producer Realtime Gaming just revealed that this year’s release will be complemented by a sleek mobile version of the game. This will definitively satisfy all gaming fans who have a preference for a slot while on the move. And you can also be a part of Jackie Chan’s and Hao Li’s team in their fights with Japanese intruders. Help free the villagers by working with your fingertips (no Kung Fu required)!

To write a review you need to be logged in.